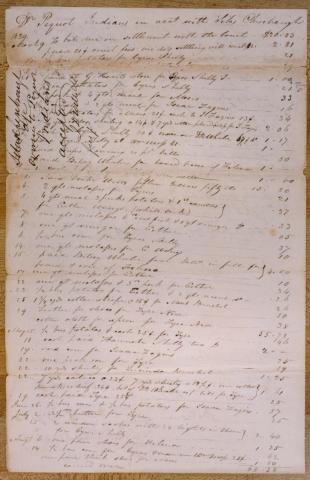 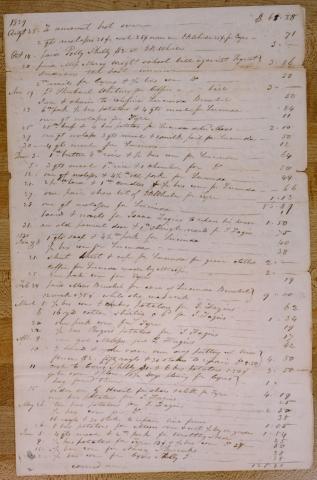 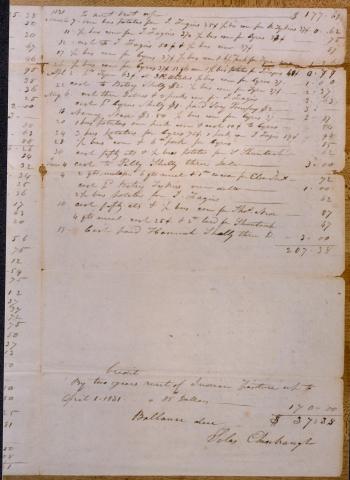 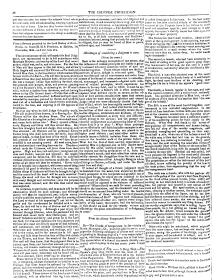 Access image
Image Metadata
Summary:
Silas Chesebrough's report to the New London County Court regarding the Eastern Pequot's annual income and expenses
Cultural Narrative:
Hello, my name is Erica Blocker and I am one of the NEH Community Scholars. I am a student at Mitchell College with a major in Criminal Justice. My plan in the future is to work in the Forensic and Criminal Justice field. It is an honor to work in as a NEH CARES Grant Community Scholar because I want to learn more about my Native American culture. I wanted to learn more about my genealogy and I feel that this was the best opportunity to do so. Opportunities like this and others like the archaeological field school with UMass Boston are better ways to help me reconnect with my tribe and learn more about it.
Moses Brushell married Sylvia Brushell and had two children named John and Tamer Brushell. Tamer Brushell married Emmanuel Sebastian and had nine children. Their names were Tamer (Lina), Silva, Sarah, Solomon, Albert, Francisco, Mary, Moses, and Calvin. My mom told me that she knows Francisco as being her great-grandfather. He then bore a daughter named Phoebe Esther Sebastian-Smith. She then gave birth to my grandfather. My grandfather had my mother and this would make Francisco my great-great-grandfather, Tamer Brushell and Emmanuel would be my great-great-great-grandparents, and Moses and Sylvia Brushell my great-great-great-great grandparents.
Emmanuel Sebastian is my great-great-great-grandfather. My grandfather told me about how I had a relative that was of Portuguese descent from Brazil. Both my grandfather and my mother told me some things about my great-grandmother, Phoebe Esther Sebastian Smith.  She is believed to have started the tradition of bringing a big pot of baked beans to the annual Pow Wow, something my grandfather continued.  He would also bring my mother and uncles to the reservation very early in the morning for Pow Wows, making sure to participate in everyone and vote for whoever he believed should be part of the Tribal Council.
While I was always a little familiar with my great grandmother Phoebe Esther Sebastian Smith, I have learned a lot more about my two ancestors, Moses and Tamer Brushell. Before participating in this grant project, I had never heard of them, although others in my family and the Elders regard Tamer as a basket maker, medicine woman, tribal leader, and matriarch of the tribe.
I also learned about Eastern Pequot marriage practices and how they have strengthened the tribe.  In many instances, tribal members married other Eastern Pequots, but the biographies show that they also took Mohegan and Mashantucket spouses, and in some instances, married into the African-American community.
The history of my family shows that Tamer married Emmanuel Sebastian, a Portuguese mariner, and had a large family.  Eight of her nine children married Indians -- Shinnecock (my line), Narragansett, Mashantucket Pequot, and other Eastern Pequot -- and in one instance, married an African American.  My ancestors, Francisco and his Shinnecock wife had ten children, nine of whom married another Indian (Narragansett, Mashantucket Pequot, and Eastern Pequot).  Their daughter, Phoebe (my great grandmother), married an African American man.
Inter-tribal and interracial marriage and is the thing that kept the Eastern Pequot tribe alive, that kept the Eastern Pequot blood flowing.  Without it, my tribe, family and I would not exist; we would be extinct.
Exploring documents about my two ancestors, Moses and Tamer Brushell, helped me understand more about where I come from and who in my tribe is related to whom, especially how the cousins I met during this internship are related to me. I am very thankful to take part in this opportunity and to learn more about Pequot history.
Document Links
Image(s) and Details
Scholars' Transcription
Annotated Transcription
Title:
Eastern Pequot Overseer Account from March 1829 to June 1831
Community:
Eastern Pequot Tribal Nation
Protocol:
Eastern Pequot Public
Category:
Work, Poverty, & Economy
Keywords:
_Potatoes, _Corn, _Molasses, _Meal, _Windows, _Payments, _Purchases, _Fences, _Padlocks, _Seed Corn, _Winter, _School Bill, _Summer, _Iron and Chain, _Grave Clothes, Coffins, _Death, _Hopelessness, _Survival, _Endurance
Original Date:
Rights:
Images may be used only for purposes of research, private study or education. To publish, exhibit, or broadcast this image, permission must be requested and granted in writing using the following form: Request for Permission to Publish, Exhibit, or Broadcast Reproductions of Materials from the Connecticut State Library or the Museum of Connecticut History. For additional information regarding copyright and publication contact the Connecticut State Library through the website http://www.cslib.org, or Connecticut State Library, 231 Capitol Avenue, Hartford, CT 06106. 860-757-6500, Toll-free 866-886-4478.
Traditional Knowledge Labels: