Mount Hope (Montaup) is a large hill overlooking Mt. Hope Bay in present-day Bristol, Rhode Island within the territorial homeland of the Pokanoket Wampanoag.  During the mid-17th Century, it was the main village of Metacom (Philip) and the base of operations for his military campaign during King Philip's War.  Nearby, at Mt. Hope Neck is Mirey Swamp, where Philip was slain on August 12, 1676.  While colonists fought over Mt. Hope after the war as a conquest right, Charles II settled the dispute by granting it to Plymouth Colony on January 12, 1680.  Later that year, it was sold to four wealthy Boston merchants and incorporated as the town of Bristol, Massachusetts the following year.  In 1747, Bristol was transferred to Rhode Island Colony in 1747.  Lepore, The Name of War, 173, 180, 182.   Wikipedia.  Image: "Philip, King of Mount Hope", from the Church's The Entertaining History of King Philip's War, line engraving, colored by hand, by the American engraver and silversmith Paul Revere. Mabel Brady Garvan Collection, Yale University Art Gallery. Courtesy of Yale University, New Haven. Conn. 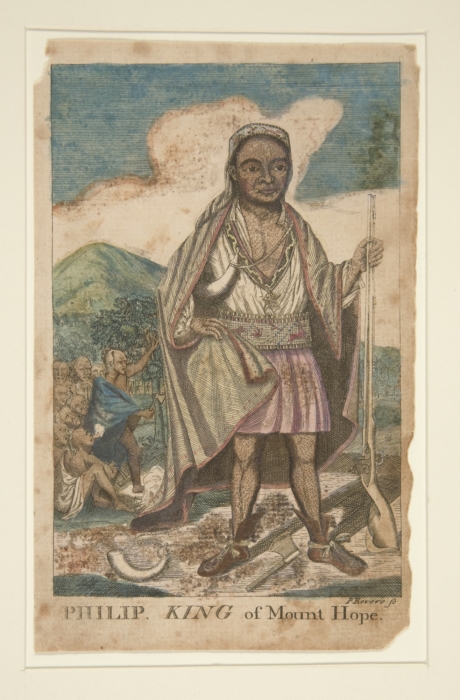